About Us and Mission

A group of concerned individuals started the Food Bank in 1983, to make sure that neighbors in need did not go hungry. Back then we were Junction Community Food Bank (JCFB) and distributed food from the old Jefferson School. In 1989 we leased a site at Genesee and Fauntleroy and settled in for 18 years.

We were now serving thousands of people a year out of our small leased Genesee site, the dream was to have a permanent home.

With an unexpected large bequest from the estate of Earl Vic we teamed up with the Delridge Neighborhoods Development Association (DNDA) and, in 2002, launched the Three Projects/One Community capital campaign and raised funds to build the West Seattle Community Resource Center, Croft Place Town-homes and the Youngstown Cultural Arts Center.  We started distribution at our current location at 35th & Morgan in May 2007. 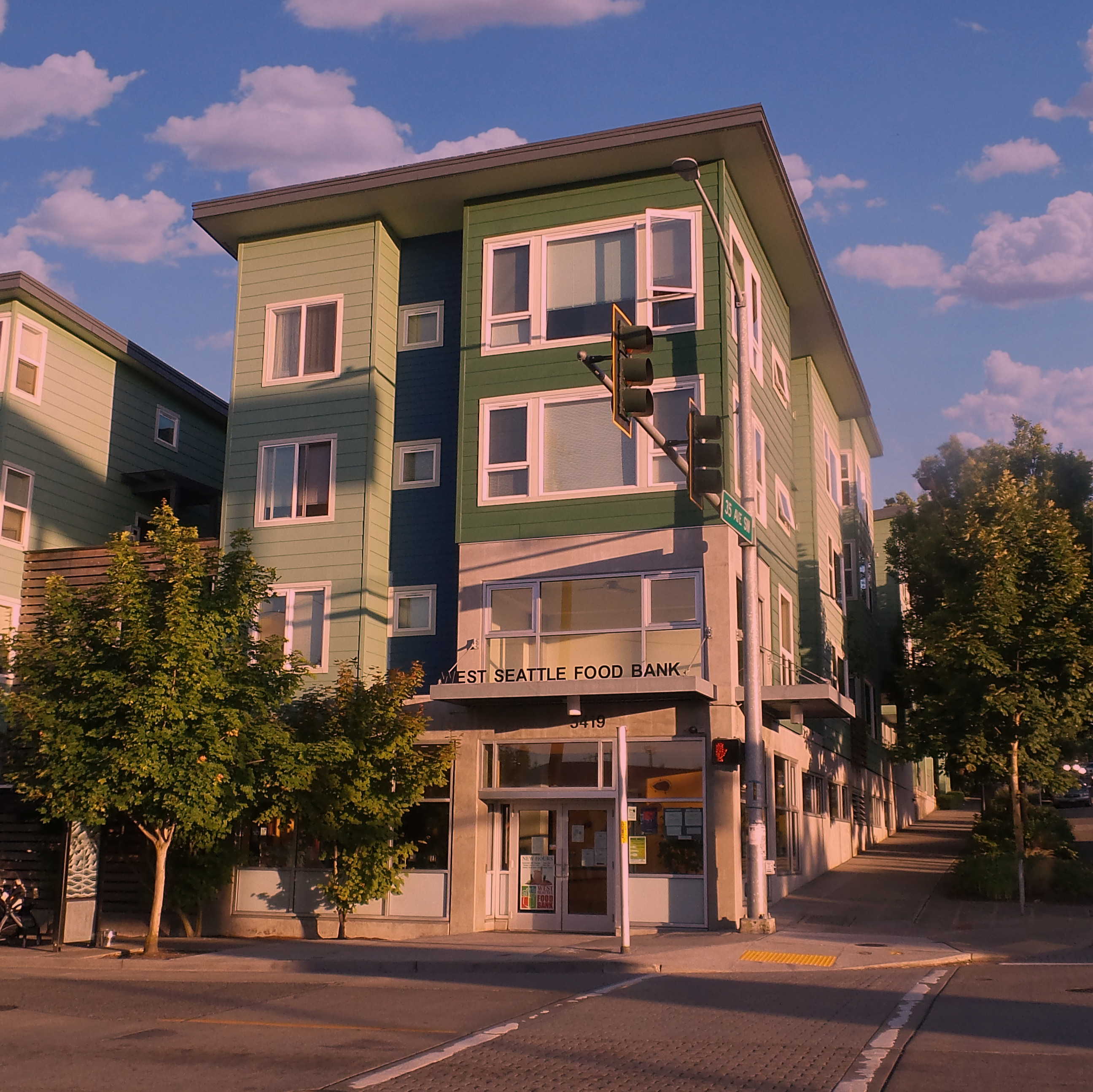 The West Seattle Helpline was founded in 1989 by a caring group of neighbors with the shared belief that community members should help each other during difficult times. From the organization’s beginning, many churches, businesses, community members, and clubs like Kiwanis and Rotary have been involved.

In 1995, the West Seattle Helpline opened its free clothing store, the Clothesline, which is the only one of its kind in West Seattle. The Clothesline provides basic attire, professional wear, and school clothing for our neighbors and their families.

For 30 years the West Seattle Helpline has been offering assistance and referrals to our neighbors struggling to meet basic needs such as housing, utilities, and clothing.

As of March 1, 2020, the West Seattle Food Bank and West Seattle Helpline’s merger into one stronger organization was completed. We are excited to combine strengths and resources to improve and expand our services in this community. Joined together as one organization, our services include the food bank, mobile food bank, home delivery, backpack program, rent and utilities assistance, community resource connection, bus tickets, the West Seattle Clothesline, and more.

All the needed programs that both agencies provided in the past will continue as we move to serve this community in a more efficient and effective manner. Together we can prevent hunger and homelessness in West Seattle through the power of neighbors helping neighbors. 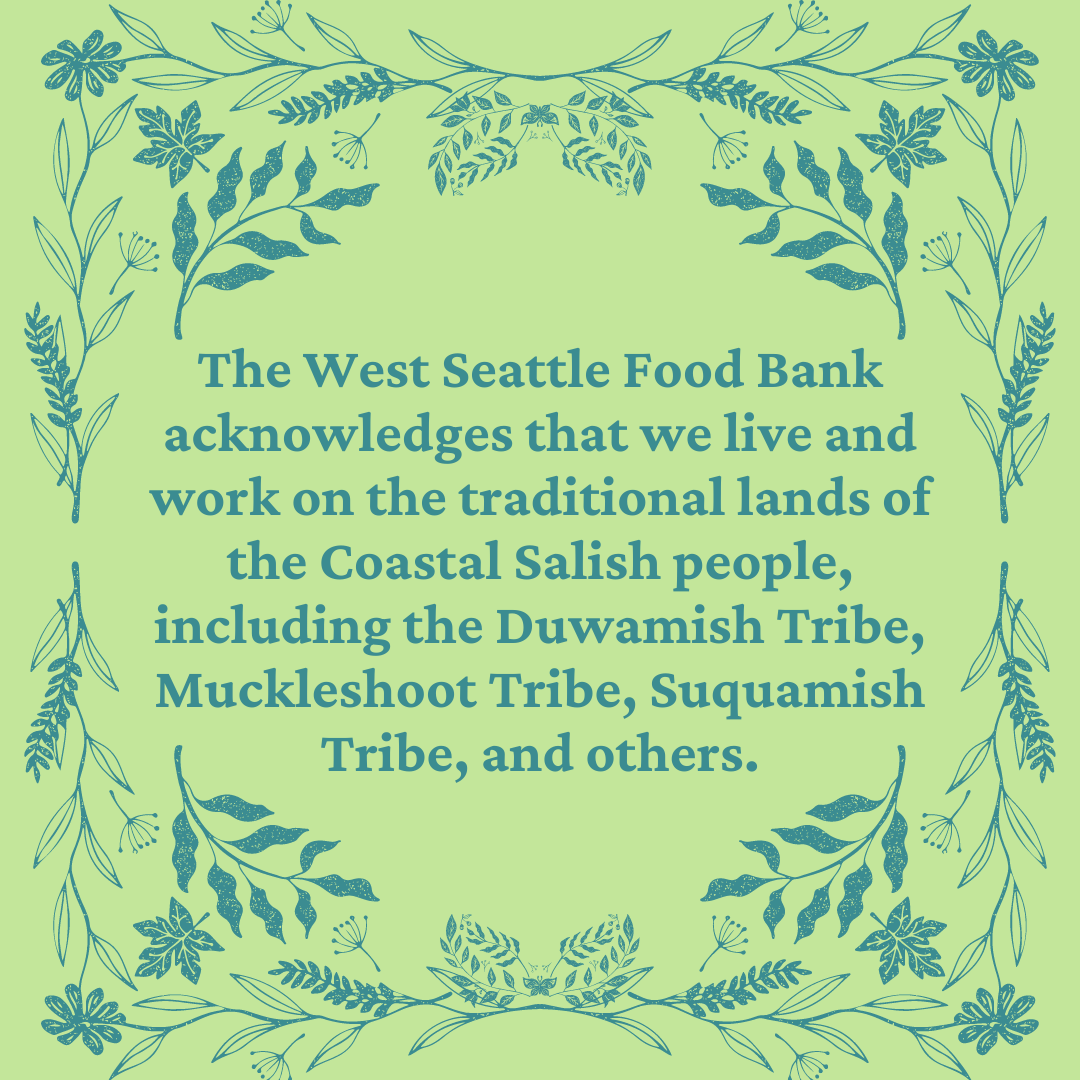 OUR MISSION: West Seattle Food Bank strengthens the community through the power of neighbors helping neighbors, working to ensure all in our community have access to the essential necessities of living.

OUR VISION: We envision a strong and connected community in which all people have access to safe and nutritious food and the essential necessities of living.

Compassion & Respect – recognizing the inherent dignity of each client

Collaboration & Cooperation – engaging and involving a network of community members

Education & Prevention – striving to understand, eliminate and prevent the root causes of hunger

Stewardship & Sustainability – being responsible stewards of our resources.

We sincerely believe that Black Lives Matter. At the West Seattle Food Bank, we see first-hand every day the results of the deep inequity in our society. We stand in solidarity with those who face injustice, violence, and inequitable opportunities.

As an organization committed to strengthening our community, we acknowledge these injustices. We actively work to educate ourselves and our community on these systems of oppression, our role within these systems, and the disproportionate impact they have on the lives of our Black neighbors and neighbors of color.

We stand in solidarity with the protesters here and across the country who are fighting for the lives and freedom of all Black people. We remain committed now more than ever to our mission of neighbors helping neighbors.